The hidden gem exhibitors should tap into for every tradeshow

Booth Babes: we see them time and time again – effortlessly running on “smart treadmills” at CES (somehow not breaking a sweat) or sporting QR code-emblazoned tank tops at SXSW demanding passersby to “scan me.” Since the 1960s, this age-old marketing tactic has popped up at tradeshow after tradeshow, peddling everything from automobiles to shiny porcelain toilets.

While booth babes (both male and female) may grab attention, not all attention produces the desired results. It wasn’t until earlier this month when I attended my very first Wizard World Comic Con, that I realized just how terrible of an investment booth babes are compared to passionate fans who actually use and own the products.

I flew to the St. Louis Wizard World to meet Needle customer Newegg, who opted to staff their gaming display with advocates, actual gamers – rather than booth babes or even employees. I expected to see Newegg advocates there to supplement regular trade show personnel, but was surprised to find that they outnumbered the Newegg staff.

I’ve long been a proponent of advocacy (it’s why I started Needle six years ago). But it wasn’t until I saw Newegg advocates in action that I discovered the magic of advocates at events like trade shows. Exhibitors everywhere could be as forward thinking as Newegg’s marketing team, staffing booths with the their most loyal, passionate customers. Connecting prospects with their peers and influencers works. Here’s why:

Advocates know what they’re talking about

At Wizard World, Newegg brought along a group of four expert advocates who regularly interact with shoppers on their website in gamer-to-gamer conversations. Who better to speak with attendees about the latest MSI Tobii (eye tracking technology) than fellow gamers who have played on this system? The result is an authentic, no pressure conversation – not a common occurrence on a trade show or conference floor. 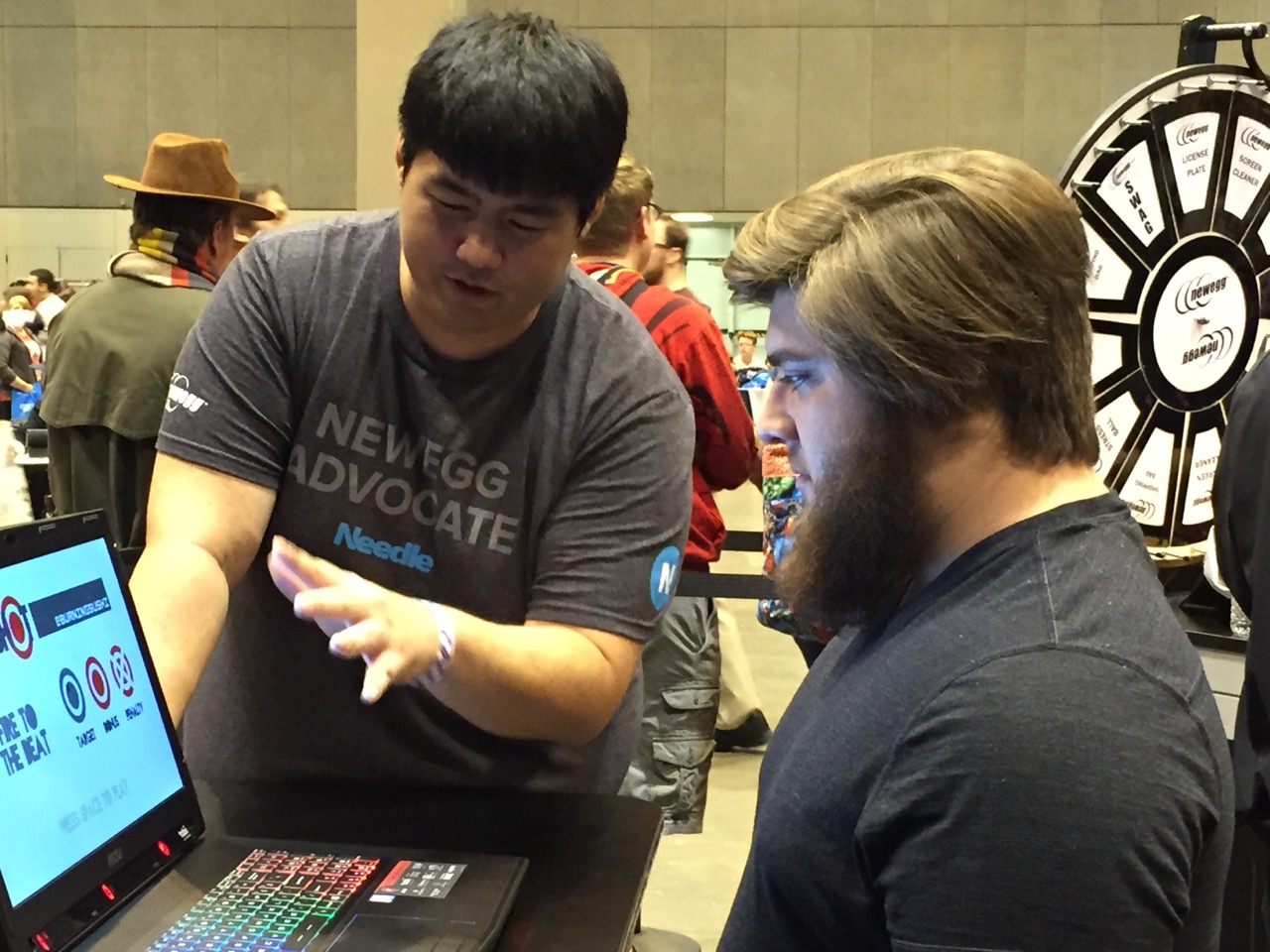 Advocates actually want to be there

Rather than enticing unenthused employees to push pamphlets at a booth for three to five days, imagine sending in a group of enthusiastic, brand-loyal customers – many of whom will compete to win opportunities like this to represent your brand. Not only do they get to represent the brand they love, they get to mingle with employees of that brand, sharing knowledge and feeling included. This is a once-in-a-lifetime experience for many loyal advocates.

The average cost of a face-to-face meeting with a prospect at a tradeshow is $142. Most of these meetings come in the form of regurgitated sales pitches from the mouths of exhausted employees; however, when you put your biggest fans in front of prospects, you’re introducing a form of third-party validation right at your booth. According to Google research, the average shopper consults 10.4 sources of information before making a purchase decision. Why not shorten the research phase by putting a trusted source right in front of them?

On average, exhibitors allocate 15% of their tradeshow budget to staffing needs, including travel and Per Diem. This estimation doesn’t include employee time spent away from their normal job. And how do the aforementioned booth babes stack up? They can cost up to $1,000/day.

Advocates are a fraction of the daily cost exhibitors spend on employee and promotional staffing at trade shows. And because brand fans live everywhere, retailers can selectively invite advocates within close proximity to the trade show, reducing cost on air travel.

Isn’t it time to retire booth babes and give your customers booth brains – people who actually own, use and love your products? Give it a shot. Your employees, your raving fans, and everyone who stops by your booth at the next trade show will thank you.

Find out how much new revenue you can generate with real-time brand advocacy.